What Is a Peshtemal?

What Is a Peshtemal?

Peshtemal towels are lightweight, cotton towels traditionally used in Turkish baths. Often hand-woven by local artisans, they are also known as hammam or fouta towels and are used in Turkish baths both to cover the body during bathing and to dry off afterwards. Recently, Peshtemal aka Hammam towels have become more and more popular around the world.

I remember the time 5 years ago when I was first to introduce the Peshtemal towels and clearly remember people thinking of them as tablecloths or pashminas. They had no clue that they were actually towels. And they were absolutely stunned to hear that too. Now they call them by their proper name. They are commonly known as Hammam towels in the UK but back in Turkey they are known as pestemal or peshtemal. So to give a better understanding of what hammam towels are, I decided to write on what to expect, especially if you are a first time buyer.

Traditional peshtemal towels have centuries long tradition heavily rooted in the Turkish Hammams – the public bathing places since the Ottoman times. This was and still is the garment used to cover the nude body while bathing in public hammams and then to dry themselves with at the end of the bathing. They are offered free of charge at the reception area of the hammams for you to use them whilst you are there and return at the end of the session.

Now, this traditional cotton cover up has become a very trendy yet still very humble and naive towel which in some ways reinvents the concept of a towel.

They are extremely lightweight, compact, super absorbent and quick drying. These are all the qualities that go well with the needs of modern world which is all about speed, functionality & convenience.

Peshtemal towels are woven products and totally pile free. They are flat and thin. So don’t be disappointed when you see these towels thin and flat. It isn’t because of poor quality. They are meant to be thin hence quick drying and smell free. The thickness can vary. Some are super fine as some others are slightly thicker. The thicker version is great as a bathroom towel throughout the year. The lighter version on the other hand is great for outdoors, camping, backpacking, gym and travelling.

Some peshtemal towels come with the thread running loosely on one side of the towel. That shows that the towel is individually hand-loomed. Some retailers prefer to cut them across to avoid any misunderstanding and confusion for the first time users and also for its ease of use. Here at Cotton and Olive, we prefer to keep them as they are in most of our models. But if they annoy you in any way, there is no harm done if you cut them off. That is perfectly fine.

Turkish Peshtemal towels have been produced in a few different localities in Turkey but we source ours straight from Denizli at the South West of Turkey. Denizli is famously known as the textile heaven of Turkey. There are huge towel and curtain manufacturing factories and they are the lifeblood of the Turkish textile industry. The tiny villages in the surrounding areas of Denizli are mostly known for their peshtemal production which is compared to the production of towels in Denizli is quite low-key and hand-labour intensive.

Peshtemals are not produced in a factory environment. They are mostly produced at the homes of the artisans who have been doing this business for centuries. The weaver’s family home is usually 3 storey detached house where in the ground floor the looms have been placed and the rhythmic sound of the loom working from side to side is a music to their ears. They live on the second floor and keep their products packed on the third floor as the storage area. If they can afford it, they open a retail shop on the high street of the village to sell their products straight to customers.

So weaving the peshtemal towels is a family tradition passed on from father to son/daughter. Our artisans have been doing this business all their lives and proud to pass it on to the next generation with their own signature . They are extremely proud of being the forerunners of chimney-less production which is getting immensely popular in other cultures too.

Peshtemal weaving is very much like weaving a rug, expressing your feelings & emotions through the pattern they weave and the colour schemes they employ. It is highly personal and each weaver has a different way of weaving even if they weave the same pattern as the other weaver. They always turn out different unless they are done by the same artisan. The skilled artisans name their own patterns and in a way trademark that pattern under their name.

At Cotton & Olive we work directly with the artisans in their own locality and try to bring their best produce in the best condition for you to enjoy. 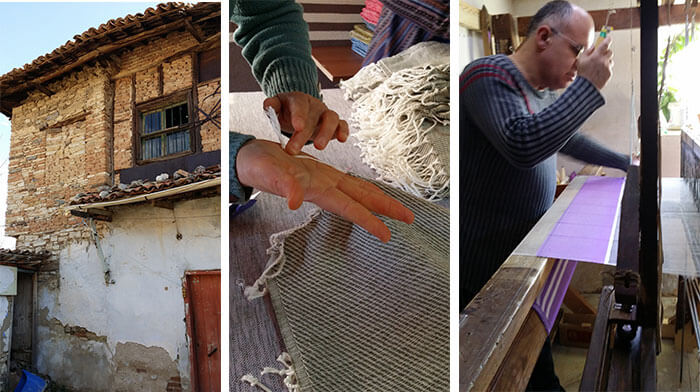