Everything you wanted to  know about hammam towels

The origin of hammam towels

Hammam towels have an interesting and extraordinary history, literally interwoven with the history of Turkey.

Over time the popularity of hammam towels or peshtemal as Turkish people call it, spread among the commoners. They used these flat-woven towels as wraps to cover their bodies while bathing in public baths (hammams). The deeply-rooted and globally-known hammam bath tradition of the Ottoman empire is the origin of hammam towels’ popularity and name.

Due to their functional and comfortable qualities like being lightweight, compact, durable and exceeding absorbent, the historic hammam towels are still hugely popular in our modern world and in high demand.

Artisan for a reason

Textiles – especially the opulent ones made of silk, wool, cotton; wool rugs and carpets – were always important lifestyle additions in the homes of the emperors and the high ranking officials to display their rank and influence. Ottomans, being on the busy trade route, always secured the best quality raw materials.

The artisan weavers of the Ottoman times were under the state control. They turned these silks, wool and cotton into beautiful and durable textiles under the strict regulations of the state. It was a form of art taken seriously. So, whatever these masters of weaving produced by hand on the looms, they met the highest standards of the quality under the government surveillance. That’s why we call them artisans. 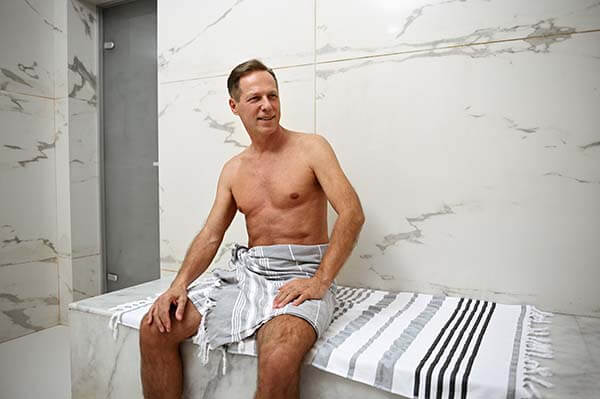 Down through the generations

To this day, the weavers of the hammam cloth are the family descendants of the grand masters in history. And it was and still is the responsibility of every master, and the most natural thing in the world, to teach this ‘art’ to their sons and daughters.

This family tradition among the weavers in Turkey is still a fact when you visit textile hubs in Turkey. Walking on the streets of these small textile villages, you hear the sound of shuttles in their own rhythm while you pass by every home that is actually their ateliers.

One of the main textile hubs in Turkey is Buldan, Denizli. You can read further about this small textile village by clicking on the link here which will take you to another post of mine focusing on village life of Buldan. It is a small village with beautiful and lush mountains that we source our hammam towels and other home textiles coming out of the hands of these masters.

Hammam towels and other hammam variations

Hammam is a general term for the flat-woven, natural looking cloth weaving the yarn across the warp and weft. Not all hammam cloths are towels. But the best-known use of hammam cloth is for towels, as modern people think of hammam cloth first and foremost as a means to dry themselves.

Today, some local weavers produce only hammam cloth (some call it Buldan cloth) and sell it by the meter to other textile businesses to repurpose as  tablecloths, dresses, curtains and upholstery. Some other weavers focus on producing designer hammam towels on tassels while others produce different styles of throws and bedspreads depending on the span of the loom. Small looms allow creating smaller hammam cloths like hammam towels, shawls, mats, table runners (typical width is 90 cm). The traditional old hand looms are in this category with a narrower span. However, on larger automated looms, it is possible to produce larger pieces like sofa throws, XL bedspreads and blankets up to 300 cm in width. The span of the loom dictates the width of the fabric and the purpose of the fabric.

Now we know that ‘hammam’ is a general term for a particular type of woven fabric which dates back to the 1500s, we can look at the different applications of hammam cloth today.

As mentioned earlier, the modern world loved hammam towels and adopted this product of centuries old craftmanship into everyday living. Cotton and Olive started its trading life in 2012 selling only hammam towels. However, over years, business dynamics steered us beyond hammam towels towards a broader range of products made from hammam cloth. Hence, we added cotton hammam bathrobes, followed by tasselled hammam throws and XL bedspreads & blankets. But we always kept hammam towels at the core of our business.

At Cotton and Olive, we are trying to create modern designs applying the traditional weaving technique. Some of our hammam towels are fully hand-loomed and some others are produced on semi or full automated looms.

The cultural heritage of weaving going back to Ottoman era is always at the centre of our business and the reason we love what we are doing. This is our heritage. We always love to keep the traditional elements. For us the most beautiful manifestation of this Turkish weaving heritage is their lovely tassels in all sorts of shapes and forms. They bring a sense of other-worldliness, a nostalgic connection to the past. It adds a lot of work to the process of creating. Hand-twisting and tying them up to keep them tidy all at the same length is really a labour of love. But we never ever think of abolishing them altogether. This is our tie to our past and we don’t want to sever it.

Hope you enjoyed reading my article. Stay well until the next time.